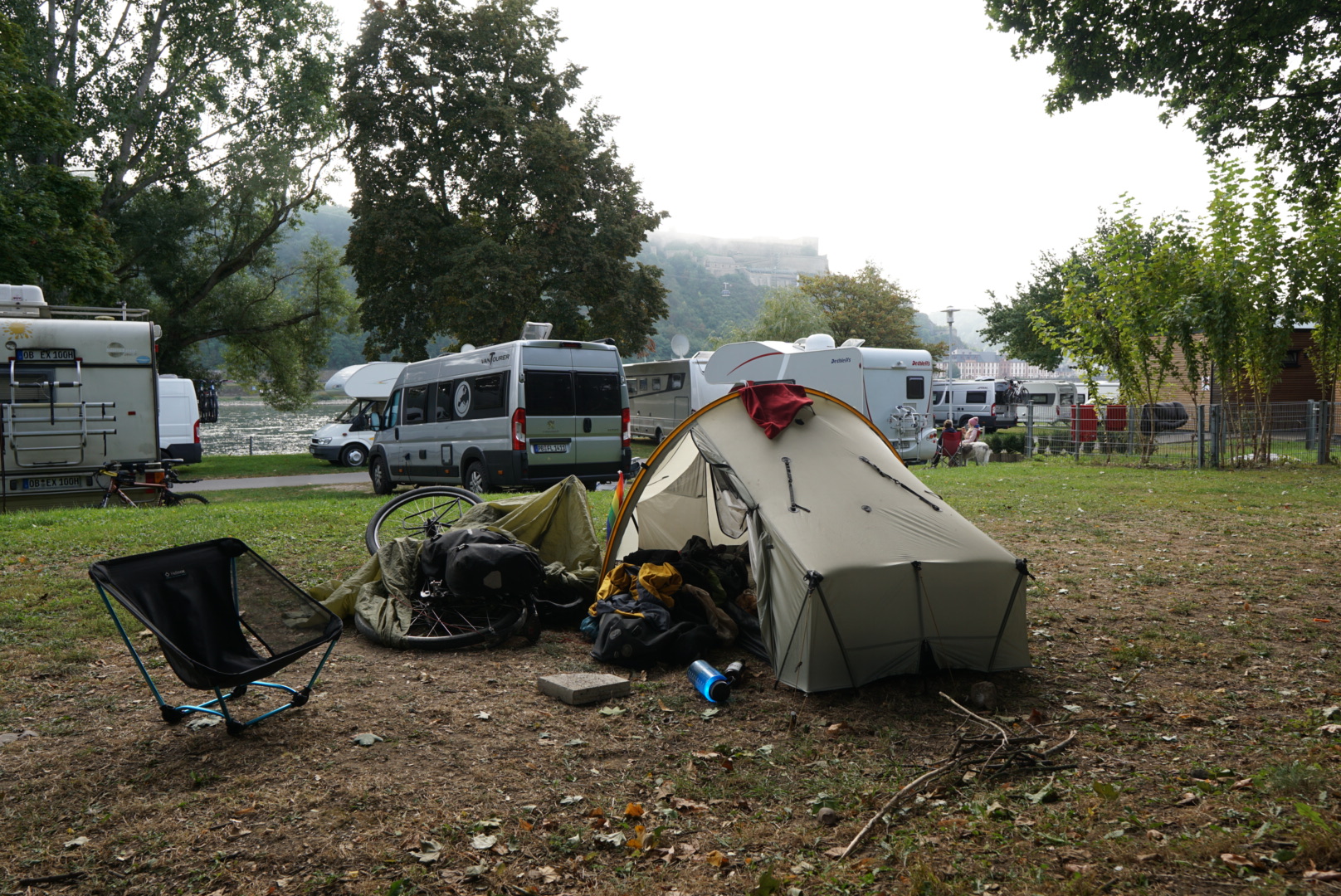 I feel I got a bit stuck in a certain mode of travelling, and I wanted to try what it’s like to have a “holiday” as opposed to “travelling”. Let’s see how this goes…

My last bike trips have all been focused on “vagabond mode”. This means minimising all costs by camping wild for free and finding food in the bins. The last time I did a similar distance trip to this one my total costs where somewhere around £20 for a month of travel (Berlin to Bath). I stayed in 1 campsite on that trip (£7 I think). And probably bought some beer, so I added some £’s.

I love the possibility to travel like that. It feels like a magic secret or something. Just learning some techniques, and conquering a little fear, it makes some profound exploratory experiences available without needing a lot of money.

But like everything, it can become a mental boundary too (I was going to write “prison”, but what do I know of prison). And honestly, it requires more energy of some kind. Vagabond energy I might call it. The ability to feel comfortable in what I’m doing. That does not come for free.

I don’t have as much of that energy as I have had on previous trips. I have more anxiety and fear that at other times. Partly perhaps due to covid and becoming used to a very restrictive life, partly due to the deep experiences following my relationship breakup. Maybe other reasons too, I don’t really know.

I also see my how travelling in that way puts me at a distance from others. I rarely see other people when travelling in the vagabond style, intentionally. Actually, I tend to avoid people in general. Hmm, that might not even be true. I have a complex relationship with other people let’s say!

So! I following my time of emptiness, from my earlier post, I wanted to create a forward vision of the trip. What I came up with was to have a “holiday” in the middle. I decided to follow the Mosel river and it’s twisting turns, and to stay in official campsites, eat official food, and drink official beer (actually wine in the thing down here, I’m gunna switch to wine from tomorrow… getting excited to carry a bottle, and have a little lunchtime sip…).

The Mosel river route also has a connection that I really enjoy, which is that my Dad was also looking forward to driving down in the campervan after he had dropped me off in Germany. I usually don’t put much thought into my route, but this feels nice to have some personal significance. I also learnt that I had already been to Koblenz (the start of my Mosel trip, although the end of the Mosel itself).

23 years ago (blimey!) I was part of a family trip around Europe, me, my parents, and my maternal grandmother. We stayed in youth hostels, including in Koblenz, where it’s high up on the hill across the river in an old prison. I remember that trip, and enjoying sitting by the river reminiscing.

So, let’s get back to the story of my “holiday”. My first night of holiday was in Koblenz. There is a campsite right at the point where the Mosel flows into the Rhine (I find it fascinating that the Mosel loses it’s identity at this point, it’s only Rhine from there on). There was a choice of 3 tent areas, I chose the one furthest away from the entrance, where there were no other tents. That’s perhaps the first observation to make.

I was surrounded by a sea of campervans. Everyone seemed to be the same. Almost all heterosexual couples. A stream of men bringing the chemical toilet to the emptying place. A stream of women with a washing up bag. Not a lot of conversations.

I’m equally horrified and fascinated. To me, they are all the same. And they are all looking at me (but they’re not, or are they?). I’ve participated in a situation in which I am sharply in contrast to them.

I realised that, and thought it’s a great analogy to my role in society in general. I choose to be in a place where everybody seems the same. Empty consumers, sheep. But it’s not true. Each person that I’m grouping together has their own rich history. I just can’t see it. I’m being super judgemental. Assuming they’re being super judgemental of me too (is that my excuse?).

So much to read into a quiet peaceful situation. Just a few people sitting on chairs. Nothing is really happening.

The economic aspect is important when considering this “holiday” time. It’s massively more expensive. I’m very conflicted about that, and can feel hesitation at every expenditure (18EUR to camp when I can camp for free? 12EUR for a meal when I can eat for less than 2EUR). Why? What does it mean? I can notice my immense pr privilege that enables me to do it without thinking much about mu finances. I have savings. And the comfort to be a little foolish with them if desire takes me that way. Knowing I can replenish them if needed (doing my fancy computer work). What a world.

I did wonder what my utopian version of all this would look like. People gathering around fires to socialise, hammocks everywhere. Scheduled times to practise connecting rituals. Then I thought that I would hate that. Then I thought again that I would love it. So long as there was space to be apart when needed. Oh, and also some easy singing circles, that’s a really nice way of bringing people together without conversation being needed. We have a lot of times in our current society when people are close to each other but not really connected.

I think I’ve come to the end of my writing energy tonight, the WordPress app is a bit annoying to write in actually, a bit buggy. Let’s throw in the photos now…