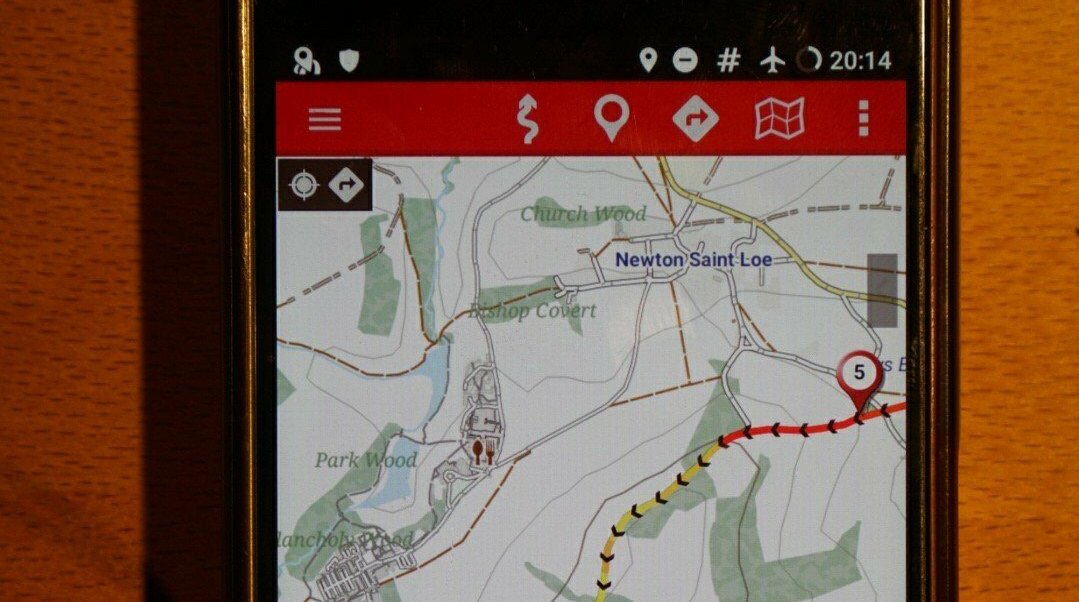 My first bike travels didn’t involve a lot of technology. I used paper maps, no mobile phone, and just a basic film camera. Now, I use quite a lot of technology (hopefully quite selectively though!). The maps are one of the most amazing things to me, so I thought I’d share my setup.

The basic summary is:

My setup has lasted me a few years in this form, if I was setting up from scratch again today, I might choose different options, but I don’t feel much need to change the setup now. When something stops working or breaks, then I would look into it again.

Here’s how it looks on the phone, the routes have gradient info which is representing using colours – red means steep uphill (I also include the comparison with Google Maps, which has barely any useful info in comparison).

I chose the Sony Xperia Z5 compact as it was one of the earlier phones to claim to be fully waterproof. It’s also one of the few smaller phones that were still available.

The phone came out in 2015, so pretty ancient by todays standards, but it suits me fine still. However, it does not get OS updates any more, so I will probably get a newer model when this one fails me.

Usually the OS is provided by the manufacturer of the phone, and is a customized version of Android OS. The manufacturer usually includes various crappy apps you don’t need/want, and eventually they stop updating it.

There are other distributions of Android though that you can install yourself.

I have LineageOS installed, although sadly it’s not longer maintained for my phone (https://wiki.lineageos.org/devices/suzuran).

It’s usually quite fiddly to install a different version of Android on your phone, so if you want to go down this route, expect some learning, lots of online researching, many frustrating moments, and if you’re not comfortable doing it yourself, have a friendly tech person that can help you.

If I was doing this again, I would also research if there are any other interesting Android distributions to use instead. It’s also an important thing to check when buying a phone, to get one that has good support.

I use OruxMaps – which used to be free, but seems to only available as a paid app now via the app stores for around £4. The download page still has an older version available (this is the one I am still using). I think it’s basically a one-person project, and has so many features, so is definitely worth the money anyway.

I find OruxMaps quite fiddly to use and not very intuitive, but in return it’s very powerful, and quite customizable, and it’s served me very well for many trips. I trust it.

It thought before that OruxMaps was open source, but it’s not. Personally, I would prefer to use an open source community developed app, but the one-person solo developer project is also a model I appreciate.

I also have OsmAnd installed and use it sometimes, but find it a bit slow. But it is open source which I appreciate. It also let’s you comment or contribute changes back to OpenStreetMap which is great.

(As the screenshot above showed, Google Maps is pretty useless for this type of use).

OpenStreetMap is the obvious choice of source in the places where I cycle. The data is collected by an ecosystem of volunteer contributors, and the level of detail is often astounding.

To actually get the maps usable on OruxMaps I download them from OpenAndroMaps (as .map files). I usually download a fresh copy of it before a tour, as there will be many updates (e.g. for Germany you can download regions, or the whole country in a 3gb file).

I usually do the downloading on non-phone computer, then transfer the files to my MicroSD card.

OsmAnd let’s you download from OpenStreetMap from inside the app, so that’s much easier.

I make a lot of use of the detail to look for spots to wild camp. I usually look earlier in the day before I want to camp, and try and find a bit of woodland, ideally near a river, stream, or lake, that has a track or footpath through it, and a few footpaths in the area. I like somewhere that people do walk (so it has a public feel), but not too many people. It’s often possible to find really nice spots just by careful analysis of the map.

In my 2011/2012 UK bike tour I used Ordnance Survey maps, which are truly a thing of joy and beauty (a lot of human curation goes into them to make them very clear, informative, and readable). Back then I was using an iPhone, and I paid £80 to get all of the UK in 1:50k scale. Now it looks like they have their own app and subscription price plans. As much as I love Ordnance Survey maps, I’m an OpenStreetMap person now. Sorry!

I usually don’t put much effort into routing. A day or two before departing just put a start and end point into some routing service, and off I go! Maybe a bit of fiddling to minimize hills if I have less time, or play with a few intermediate points to make it go to some nice looking places.

I am usually wanting to visit some people en-route so that might be the main factor determining the route.

I do enjoy it if I can join a long distance bike route for a while, so sometimes check the EuroVelo (europe) or Sustrans (UK) routes separately to see if I can join one of those for a longer time period, even if it’s a bit more wiggly.

I find OpenRouteService a good default routing service to use, and it has a lot of options to fiddle with if you like that sort of thing. cycle.travel has also worked well for me before.

I download the routes in .gpx format, and usually send the files to myself using Telegram (which then keeps them somewhere I can easily find them again), and from there OruxMaps or OsmAnd can open them.

I also have brouter installed, which installs a “routing service” into the phone, that different apps can then use. Both OsmAnd and OruxMaps can make use of it. I don’t use this much, but sometimes useful for doing shorter routes (like for one day of cycling) as it can all be done within the phone itself (OruxMaps can do routes using brouter).

Once I’m actually cycling I often deviate from the route, if I see something interesting along the way, either on the map, or using my eyes. I like to keep open to what I might encounter that I couldn’t have planned.

I went through a few different types, initially some of the cheap rubbery things that wrap around the handlebar and grab the phone at the corners, but they always broke after not so long.

My current one is a somewhat overpriced KlickFix thing (I think it was 55EUR), where the phone goes into a waterproof pouch, and then that clips into a quick release thing (handy for quickly removing if popped into a shop). The case makes it a bit harder to read in sunlight, but I like it being waterproof. It has torn up the side though, and I have to use a stick to wedge it in, but still works just about well enough!

I’m pretty dissatisfied with all of them really but I stick with them until they break beyond repair, so will wait until that happens again before perhaps exploring some other options.

What do you use?

There are so many different ways to do this stuff, and most of the options I found out about through other people, often face-to-face. These aren’t heavily advertised things, so take a bit of digging to find, I’d love to hear about other ideas too! What do you use?

Clothes washing on the move